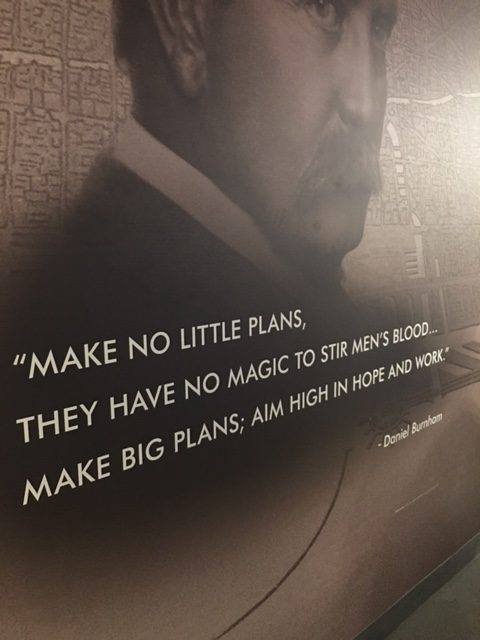 “Make no little plans, they have no magic to stir men’s blood….make big plans; Aim high in hope and work.” Daniel Burnham

My son and I just got the opportunity to watch Hamilton in Chicago. We have devoured the soundtrack for months. It is in and of itself awe inspiring in its delivery….of an awe inspiring story. These revolutionary men and women literally ‘turned the world upside down’ with genius, vision and grit. They bravely stood for ideals, imagined a different way, and pursued it with intensity and willing sacrifice. Amazing really. I have often pictured the Founding Fathers as a polite group who sat quietly for artist’s renderings…with handshakes and lofty speeches. But I loved their stage portrayal as a bunch of bad ass, foul-mouthed, passionate collaborators and antagonists, engaged in a decades long brawl of ideas to bring the best possible version of a new nation and idea to life.  They saw beyond the status quo and took steps to change it for themselves and future generations.

Bringing that story, bringing true revolution, to life could not be told with a standard Broadway formula. Hamilton is ground-breaking with its use of contemporary language and music. I am truly inspired by Lin-Manuel Miranda bravely following his gifts, blazing a new trail, and sharing it with all of us.

I honestly had chills through the first act. It was the soaring vocals, coupled with the revolutionary messages held within each piece. I am a huge fan of revolution. One line keeps ringing in my head….

” We have to make this moment last, that’s plenty.

Scratch that, this is not a moment, it’s the movement”

Somehow I had remembered the American Revolution as one and done in 1776 with the Declaration of Independence, a moment. But there were years of unrest before and not until 1781 with the Battle of Yorktown that we really won the war. Then decades more to really sift through HOW to pull off a brand new nation. Calling it an evolution is less sexy, but likely more accurate. To me, the pelvic health and fitness community feels like that passionate bunch. As someone who has tried to introduce new ideas and concepts into the conversation, it has at times felt like that brawl of ideas. Each challenge, each question, each disagreement…honed my own thoughts. Each time I thought this is it- this gig, this lecture, this conversation, this well-articulated point, this awesome tweet, this insightful blog….this will turn the tide. They were each, only moments. But each moment a step…on a very long road of step-over-step-over-step. Now, I recognize this is a movement, an evolution and change takes so much time.

What I know now, almost 14 years after starting down this road, is that I have only given voice and clarity to the musings of countless practitioners who have come up against walls in care and fitness; against ideas, edicts and regimens that no longer made sense. I am no longer standing alone in this pursuit, not by a long shot. Many have shared with me their own professional skirmishes. Many weary that women still come to them poorly educated about their body and pelvic health, ashamed, and limited by old ideas and fear mongering edicts despite what seems like a long effort online and in-person to turn the tide.

But if this story, told beautifully in Hamilton, has anything to offer us, it is that we have only just begun friends, and our efforts will be worth it. Our collaboration, our brawl of ideas, our sharpening of one another, is slowly building a new way for women related to pelvic health and fitness.

Be inspired, be refreshed by this revolutionary story. Get out there and be a bad ass, passionate and tenacious collaborator, educator, clinician, and trainer in your community. A foul-mouth is, of course, optional.

Let’s ‘make no little plans’…let’s ‘aim high in hope and work’….and let’s keep it up.

Wanna join the evolution, not miss a blog or extra Black Friday discounts? Subscribe to my newsletter here.

When should I think about my pelvic floor and brea...
Web-Based Treatment for Women with Stress Urinary ...
Diastasis Recti: To Brace or Not to Brace?
Intra-Abdominal Pressure: Pelvic Health Friend or ...