Should We Cue The Multifidus? 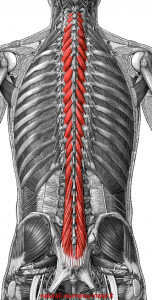 Q: Just curious, what are your thoughts as to what the multifidus is doing in the flow of dynamic stability?  You don’t talk about it much. What gives? P

A: You right, I don’t tend to include the Multifidus in my conversations in social media, videos, and blogs in regards to the Pistoning system that regulates dynamic stability and pressure. Please, don’t misinterpret that as a loss of love for that large group of very small muscles that run up along either side of the spine. I am actually a big fan. The multifidus has a role to play, we are (and I am) still sorting out how that happens in real time in response to the muscular and pressure interchange of dynamic stability.

Here’s what we do know (or I am aware of). The multifidus provides segmental stability of individual joints of the spine, and it does so in anticipation of movement, just like the rest of the members of the : Diaphragm, Pelvic Floor, and TA. It also has the capacity to move the spine. This dual capacity is interesting, and important to our ability to precisely stabilize and move individual segments of the spine to achieve a myriad of movements. Currently, we understand that the multifidus pulls this off by activating from its deep to superficial fibers. The deep fibers turn on first for control of the spine, and then the more superficial fibers for assist with movement. Working together, but recruited in a pattern to insure stability first, then mobility.

We have also learned that throughout the body there are micro-movements in joints in response to breathing. This study noted joint movements in the neck, hip, knee, and ankle with each breath. This counterbalances the shift in pressure and ribcage movement, muscular work, etc. so that we stay upright and balanced through the dynamic activity of breathing. We are one big system….so I think it is biologically plausible that the entire system ebbs and flows in some way to contribute to dynamic stability….Multifidus, too.

However, I think that the major players in intra-abdominal pressure exchange that contributes to our central stability system still remain the diaphragm, TA and pelvic floor. Studies here and here support the actions of TA and PF are linked and responsive to the Diaphragm in the exchange of pressure. However, we have no studies that I know of that show that kind of interaction between the Diaphragm and Multifidus (researchers are you listening?). So we still have some missing pieces to link it all together. But my clinical experience via palpation during respiration is that there is a link between them. It is similar to how the TA and PF respond to breath, with Multifidus engagement on exhalation. But I have no evidence to back that up, just my own palpation. I do think that there is a muscular interplay, but I don’t think it is a major contributor to the pressure exchange mechanism that is part of our central stability.

But a word of caution, I do not agree with posts and blogs that tell folks to just contract their multifidus along side their TA and PF, etc. The multifidus is large (sacrum to C-spine) but it is segmented into very small units, spanning 1-4 vertebral segments, that create very precise control over individual joints in the spine. Usually when there is an issue with the multifidus, it is a specific issue in one or a few segments. I can confidently say I have never seen the entire group of small multifidus segments fail all at once …ever. Getting it to fire where needed, due to an injury or trauma, takes some precision and guidance. A general cue to ‘contract your multifidus’, in my humble opinion,  will just trigger overuse of Erector Spinae (more superficial back muscles). Many already overuse ES  in the absence of an optimal central stability strategy.

Multifidus cueing needs specificity and context to prevent a new, or strengthening an old, dysfunctional strategy. Instead, I rely on the co-contraction of the TA and Pelvic Floor (and I think the Diaphragm) and the demand of the activity to create an appropriate response from the multifidus as a whole, acting as a group in a stability capacity alongside its teammates. When needed, I precisely cue activation of the specific segment(s) of the Multifidus should that be a component of the patient’s need. Then I integrate that back in with the rest of the Pistoning team. I think this mimics my current understanding of how the multifidus works in terms of local (segmental control) and contribution to global stability (postural control).

Let me know your thoughts!

Wanna learn more, check out my online or live courses!

2 thoughts on “Should We Cue The Multifidus?”