Q and A: Can Connecting Breath to Pelvic Floor Create an Over-Recruitment Problem? 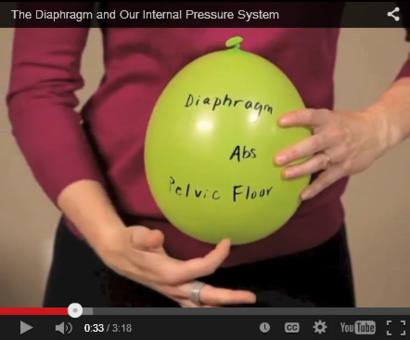 Q: Hi there, I was wondering if you would teach the “blow before you go” and lift the pelvic floor in pregnant women who don’t have any symptoms of pelvic floor issues? I mean if we do this to an already functional pelvic floor , wouldn’t we risk making it tighter?

A: Great question. Before I answer, I want to help the newly initiated to the kind of language and cues I use by clarifying some of the terms in the question. “Blow before you go” (BBYG) is one of my favorite cues. It is intended to trigger the unified and integrated action of the system that helps us control our center, keeps us dry, supports pelvic organs, and tensions fascia/approximates abs in a Diastasis. The system is the balanced interplay of pressures and muscular forces controlling the trunk and pelvis. Specifically the diaphragm, TA and pelvic floor work in unison to efficiently exchange, respond and counter balance pressure in the abdomen with their muscular work on both inhale and exhale. I demo that interaction here (and more here) :

The BBYG cue is intended to trigger that reflexive recoil of the pelvic floor to participate alongside its teammates in all activities….not just contracting by itself at stoplights (i.e. the Kegel). The BBYG cue encourages that automatic recoil through exhale BEFORE the movement begins, bc this re-creates a central anchor for the rest of the postural system and extremities to push and pull against to do their jobs efficiently.  That rhythmic teamwork between the diaphragm, TA and pelvic floor is the goal and so is the automaticity created by “blow before you go” (BBYG). The hope is that with practice it would happen as a unified, simultaneous action vs blow and lift.

Now, to answer! It’s important to recognize that in order to get a good exhale and recoil lifting response from the pelvic floor before movement (BBYG), it has to start with a good inhale. The inhale is paired with the pelvic floor lengthening. That is the first priority (inhale, with lengthening or give of the abdomen and pelvic floor) and insures we aren’t starting from an already contracted position. Thus avoiding over-engagement the pelvic floor (for pregnant and post-partum women).

But the other piece of the puzzle that I teach is prediction as it relates to the pelvic floor. BBYG is intended to create an automatic recoil that is brain driven, and the brain decides how much pelvic floor is needed based on the task at hand. But we often need to train it in consciously to start. For some women they need added awareness and connection to the pelvic floor to help them reconnect it to the system, and use it in movement strategies.  I cue women to imagine they are lifting a red kidney bean with anus and vagina to give them a visual image to help them reconnect and use their pelvic floor. We link that pelvic floor connection immediately to the breath, and then work to unify their action through the BBYG cue. Then they learn to control it. Out of the gate and in my online course for women I ask patients to predict the amount of bean lift they need- “are you lifting a couch or a pencil?”. Female athletes in particular, do tend to over-recruit if they consciously try to engage. When I am working with my athletes, particularly those that are higher intensity, I ask them to visualize and predict different percentages of lifts-what would the lift feel if you were doing 50% of your max? 30%? opening a car door? lifting your baby? The idea is that they learn control vs how much strength can they regain (though that is a bonus). Control driven work is less likely to become an over-recruiting activity. This is also important so that women distinguish their need for added oomph for a challenge at the gym vs what they might need to pick up the toys at the end of the day. A strategy for fitness, needs to be chilled out if you are simply air squatting to pick up an abandoned pacifier. Your strategy must meet the demand.

It is also important to note that as a client gains control, strength, and restores balance to the system they need less and less engagement to lift the same weight. It has become trained. We get this for other muscles….need to think that way for the pelvic floor. The hope is that by building brain strategies vs just building muscle that just the right amount of force balanced with pressure will help them lift what is in front of them, baby or barbell. Brain decides! Hope that helps!

Wanna learn more about the system and strategies to help you with your connection to your pelvic floor and integration into function and fitness? Check out the online course I designed for women. It’s on sale now until midnight PST tomorrow night (Oct. 31, 2017)! Use code ThreeYearsWow on the course here! Hurry !

2 thoughts on “Q and A: Can Connecting Breath to Pelvic Floor Create an Over-Recruitment Problem?”