The Junkless Trunk: And Not in A Good Way 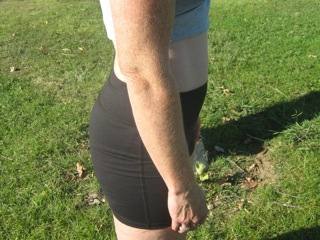 I get my sweat on twice a week with a park workout that I love – brisk walking, plyometrics and strengthening. Just me, the dog, a resistance tube, birds chirping, flowers blooming, sun shining and (cue nails scratching a chalkboard) the local stroller fitness class. How could a group of women with nothing but the best intentions disrupt my perfect scene?

Their exercise form sucks. There I said it.

The trainer pushes them on to sprinting with bad form, doing crunches with bad form, lunges, push-ups, planks, hills….all with the same bad form. They all have their bums tucked under, creating a flattened junkless trunk. Rehab pro’s would call this a posterior pelvic tilt. It’s the position most women find themselves in as their pregnancy progresses. The pelvis often rocks under to balance and make room for the added baby and abdomen out front. They get stuck in that bum tucked under position post-partum because their muscles change length and weaken keeping the pelvis tipped. The posture is reinforced over the years by daily sitting in a slump, standing and walking with bums tucked…and horror of horror exercising that way.

You might ask…”but isn’t it good to sort of tuck your bum to you know…make it disappear?” Or “My mother (or insert other primary influence here: trainer, PT, Jane Fonda, pamphlet at the doctors office, etc) told me to tuck under for better form and/or posture. What gives?”. This exercise norm of days past is now a no-no. Just as full sit-ups gave way to crunches, and now crunches are moving aside for planks, research is evolving.

Join the evolution! Here are five reasons not to tuck your bum during exercise (or ever):

2. If you run with bum tucked under, it keeps the “engine” for your run, forward in your quads. The result: a running style that is quad dominant. This results in an up/down bouncy cadence creating high impact as each foot hits the ground. The added impact of running up and down and the lack of balanced muscle action around the joints can lead to knee and foot pain and contribute to leaks.

3. A tucked under bum running posture and quad dominance, also means you cannot stride out behind you and use the glutes to power walking/running. The result: No glute support for hips and backs during running. When gluteus maximus engages,there is an upward lift of the pelvic floor. So no glutes also means no pelvic floor. No g(l)utes, no glory.

4. Bum tucked under is the most open position of the SI joint; where the pelvis connects to the spine. The result: A sustained bum tucked under position leaves this joint susceptible to irritation, particularly with impact activities including walking, running, jump rope, or simply stepping off a curb wrong. Combine a more vulnerable position of the SI with reduced pelvic floor activity (#1) and you have a recipe for low back vulnerability.

5. When you tuck your bum, you also flatten your low back. The result: a loss of the shock absorption capacity of the curves in the spine. When the low back curve disappears the discs and joints are susceptible to the wear and tear of repeat impact.

So how do you know if this is you? Here is your junkless trunk checklist:

Time to untuck that bum!  A visual image often used to enhance posture is of a string that pulls us up through the top of the head to help us get into the right alignment. Instead imagine the string is tied to the top of your bum. Pull it gently to the sky, recreating a soft curve in your low back. This promotes what is called a neutral pelvic position which is the optimum alignment for pelvic floor and gluteal function. Sitting, standing, and exercising with a neutral tilt will reduce your vulnerability to injury and promote a better result from your fitness program. And best of all-your “trunk” will look great in those jeans again!

When should I think about my pelvic floor and brea...
Dear Diastasis Community….Can We Talk About ...
Alignment: The Sequel
A Whole Body Approach: A Global Community Weighs I...

14 thoughts on “The Junkless Trunk: And Not in A Good Way”