Over the holidays my teaching partner Shelley Mannell and I embarked on a professional and personal adventure. We travelled to the Sultanate of Oman to present “Dynamic Core Across the Lifespan”. We had been asked to talk about what we consider a systems approach to central stability that can be applied across the lifespan in multiple populations. If you know anything about what I teach, then this of course means we would also be talking about pelvic floors and externally palpating them in a culture where men usually treat men, and women usually treat women. We really weren’t sure what to expect, especially in a class that would be half male. I will never forget one of my preliminary phone conversations with Omar Tamimi, our official host and president of the Oman Physiotherapy Association, in which he said “I can’t wait to hear more about the pelvic floor!”. Let’s just say I was floored (no pun intended).

I admit to some nerves before my first visit to an Arab nation.  I know the American reputation worldwide, and I was so grateful to hear from my new Arab friends their own concerns and nerves when they came to visit America post 9/11. I was not at all glad for their concerns, but we shared openly how the media only presents a view that keeps us separate, suspicious and nervous. I was so glad to hear that both of my new friends that had travelled to the States had great experiences and thought that Americans were really “nice”. Whoo hooo! My experience in Oman was the same! I was overwhelmed with our warm welcome. I am so glad I had the opportunity to learn about Oman and the Gulf Coast Countries (GCC) not as a tourist, but by living and interacting with the people. It was awesome. 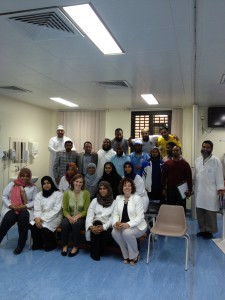 The awesome crew that took the course.

All the participants in the course and our new friends that we spent the most time with outside of class, were so open to our questions and curiosities about their country, customs and Islam. They honored us during the course with their attention, interest and questions about the material. And they were all hilarious, so much laughter throughout the week. The pelvic floor tends to do that though! I am dying to learn Arabic, just so next time I can be in on all the jokes.

Everyone spoke English and Arabic, so communication was good throughout. But you don’t realize how many colloquial and culturally based phrases you use until you’re trying to use them across cultures. Like my Ski Jump example as a way to create an awareness of the anterior pelvic floor, well…let’s just say I need to think of a new name for that next time in the GCC! My other favorite moment was when I asked my volunteer if he was “pooped” (tired). Apparently this DOES NOT translate to Arabic culture. It was a hoot.

It was fascinating to hear about their women’s health challenges. There are only two (see picture blow) women’s health therapists in the country. TWO, for a population of 3 million (2 million Omani’s and 1 million ex-pats, lots of Europeans vacation and reside in Oman).  Kauthar, in grey, did a prevalence study of incontinence in Oman and it is 42% in most areas, and over 50% in other areas. This is significantly higher than ours in North America (approximately 30%). She attributed this to the high birth rate, in her study they found the average number of births per female was 8. Most Omani families have between 6-12 children, a family of 3 or 4 is considered small. So much to consider. 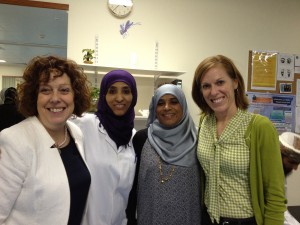 Ahlaam, in purple, is the reason we were able to come to Oman. She reached out to me via the internet and started an ongoing conversation on all sorts of women’s health and pelvic floor topics that culminated in a week together in Oman. It blows my mind still, I am so grateful for her!

There was an additional cultural caveat that I had not considered prior to getting to interact with all of these practitioners. Omar noted that as part of the custom of daily prayers (5 times a day) they must wash hands, feet, head and face before coming to pray. You must be clean to come to prayer. Omar noted that incontinence (male and female) means you are technically unclean and shouldn’t pray. And of course just like here, no one wants to talk about it or admit to it. Wow, wow, wow.  We must help remove this barrier to prayer.

To that end, I am so excited to support the #pelvicmafiaoman address all these needs. I told Ahlaam and Kauthar, “Now, you are three!”. One of the most exciting things that happened on the trip was that Ahlaam and Kauthar will be translating the webinar I made for women into Arabic!! There is so much need, and so few practitioners, they simply cannot care for everyone face to face. I hope the webinar will be a tool for them and a gateway to care for the women (and men) of Oman. The webinar, has been in a telehealth research study this Fall (a glimpse at some of the early results can be found here). Kauthar and Ahlaam hope to repeat the study there to determine the response of the Omani women! I am blown away and so excited to see how it goes.

Our trip was honestly amazing and still a bit surreal. I think both Shelley and I are still not quite sure it really happened. We were so grateful to have briefly come alongside these practitioners and share and learn from one another. Shukran (Arabic for Thank You) to our amazing hosts, and class, we had an awesome journey.

You can check out more pictures on my Facebook page.